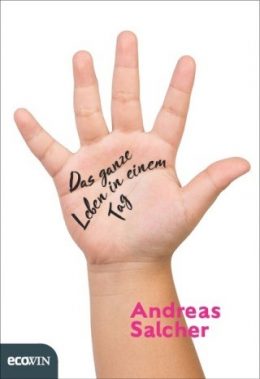 Try to imagine compressing your life into 24 hours. All those important subjects and experiences which normally occur slowly over the years, suddenly come to life from a different perspective. Every hour stands for a certain life segment between two and four years.

How old are you? Here is an overview of all the topics concerning each stage of the readers life

Of course, we can neither accurately portray a reader’s previous life with these descriptive topics, nor predict his/her future. Every life takes a unique course. The questions in this book should encourage one to contemplate their lives from a new perspective: Where do I perceive a loss of cheerfulness, and how can I regain it again? With which feeling do I awake in the morning? With which ones would I like to awake? Which goals would I seek for my future life if I possessed twice as much courage as before?

When one hears the name Alfred Nobel, why do we think of the Nobel prize and not dynamite?

Alfred Nobel cast the newspaper aside and grasped his head in his hands. We find ourselves in the year 1888. ‘The Merchant of Death in Dead’ read the headlines of the French newspaper which laid on the floor before him. He had just read his own obituary. However, it was Ludwig Nobel who had died. The editor of the French newspaper had mistaken him for his brother and wrote a long obituary for him, Alfred. Therein the inventor of dynamite was depicted as the man who had made it easier for mankind to kill each other more efficiently, and thereby becoming immensely wealthy. Alfred Nobel was so shocked over this false obituary that he decided to devote his fortune in a positive manner, namely in the form of a legacy after the time of his own death. When he did die eight years later, 95% of his fortune was transferred to a foundation with the purpose of providing prizes for contributions to the welfare of mankind. These prizes became known as the Nobel prizes and are considered the most prestigious honours for scientists and artists to this day.

Concerning those lucky ones who learned their whole life long:

The psychologist and founder of existence analysis, Viktor E. Frankl, was one of those lifelong learners. At age 67 he did not hesitate to earn a pilot’s license. In 1972 he explained in a lecture in Toronto how a pilot trainer had inspired him with new perceptions concerning therapies for people. His pilot trainer explained to him the basics of navigation on a slate:

“If you want to fly from point A in the west to point B in the east and there is a side wind from the north, you would land much further south if you neglect to take the wind into account. Hence you must aim for a point much further north from point B in view to arrive at the selected destination.“ At this moment it became clear to Frankl that one can apply this flying technique to people. He recognized: “If one takes a person as he is, then we make them worse off through the treatment. But if we consider him in a more idealistic situation than he is in reality, what happens then? We assist him in developing into a person which he could become.“ Frankl pointed out to his students that this theory stems neither from the Pilot trainer nor from him, rather from Johann Wolfgang von Goethe: “If we take people only as they are, we make them worse off; if we treat them as if they were as they should be, then we bring them to where they belong.“ For Frankl the application of this principle was the most important success factor in all psychotherapeutic treatments: Seek the best in each person and in yourself.

You can buy "An Entire Life in One Day" at your local bookseller or you can order it at Amazon.